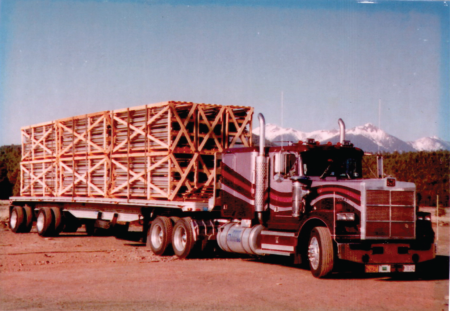 In 1985 Don Yale was challenged by a fellow driver to "do something about the way these trucks handle in the front end." With a machinist background and over two million miles of driving experience, he accepted the challenge.

He began developing a steer axle air ride prototype for his Marmon. It provided control at low speeds but not at high speeds. Solving that problem led him to invent Donvel's Motion Controls.

With the Motion Controls, the prototype became the Steer Axle Stabilizers. By almost instantaneously controlling the action of the air springs, leverage could now be applied to the leaf springs and chassis reducing over compression and snap back. This, in turn, stabilized the steer axle reducing excess bounce.  In addition, the constant holding and releasing action of the air springs gave increased stability to the steer axle making cornering safer and extending steer tire life.

With a successful product in place, word spread and in 1991 the first Steer Axle Stabilizer kits were sold. From 1991 to 1994 he and his wife, Velma, custom designed and built Stabilizer kits in their home shop in between road trips.  When orders increased, they retired from their driving career of over 35 years and in 1995 purchased the Donvel manufacturing facility in Gladewater, Texas.

Over the years, customer requests have led to more Donvel ride control products.  We now have Motion Controls for the existing air springs on the cab, sleeper, seat, drive axles, trailer axles and existing steer axle air ride suspensions.  Donvel is also proud to supply Motion Controls to other manufacturers for use on their products.

Don Yale devoted the last 30 years of his life to inventing and manufacturing the Steer Axle Stabilizers and Motion Controls to "smooth the big rig miles" for his fellow truckers.  He continued working until he died in September 2015 at the age of 82.  The Yale Family will continue Don's work of providing Steer Axle Stabilizers and Motion Controls to make the trucker's ride smoother and safer.